Never leave your pet in a hot car

As the sun starts beating down on our pale limbs once more, the announcement that comes with every summer is just as relevant as ever – A hot car can mean death for your pet. 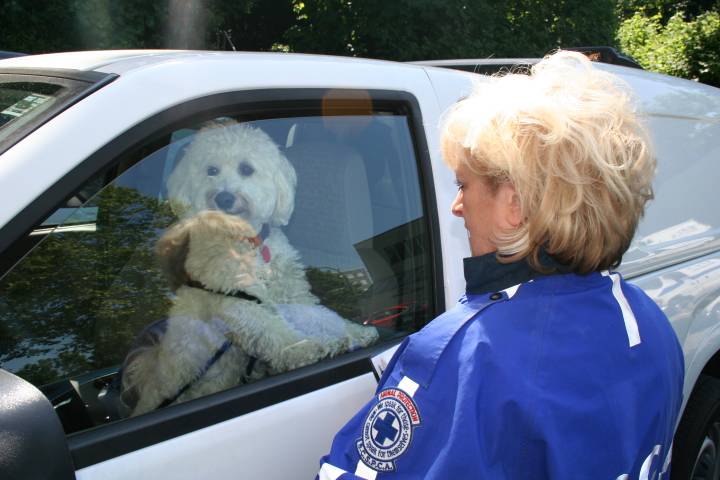 From the BC SPCA.

The death of six dogs to heat stroke by being left in a dog walker’s truck in Abbotsford just a few years ago is heartbreaking evidence. And animal advocates are yet again, putting the call out.

“Each year many well meaning Canadians take advantage of the summer by bringing their pets with them everywhere they go. We’re asking people to stop and think for a moment,”  Dogs and cats, and other animals, have a body temperature which is already several degrees higher than our own, and with their coats of fur cannot sweat and cool off as efficiently as we do. “If you think we’re exaggerating, try wear wearing even a light sweater on a hot summer’s day and then go jogging. Within five minutes, you’ll know exactly what we’re talking about,” says The Humane Society of Canada Chairman & CEO Michael O’Sullivan.

The message is simple and straight to the point: “You wouldn’t lock yourself in a sauna. Don’t lock your dog in a car.”

Temperatures in a car, even with the windows rolled down can turn the inside of a car into an oven, putting your animal’s life at risk.It can take as little as 10 minutes for an animal to suffer brain damage or to die in a hot car!

“We also often see people bicycling, jogging, roller blading and skate boarding with their dogs. Even though the dogs seem happy and eager to please, this kind of exertion is very hard on them, especially in hot weather. Don’t confuse the dog’s apparent happiness with something that may be harmful,” says O’Sullivan. Dogs tied up outside of sidewalk cafes and bars, often have no access to shade or water, and become nervous with the sounds and smells of strangers and traffic passing by.
The best place on a hot day for your animal is inside your family home, where they have access to plenty of fresh water and a cool place to sleep, is the advice he offers.

The Humane Society of Canada is asking people to take the time to educate others when they see a pet being put in a potentially dangerous situation and, when necessary, contact the appropriate authorities right away.

In order to help people prevent animals from suffering from the heat and to help those pets who are suffering, the Humane Society of Canada offers the following advice.

Signs that an animal may be suffering from the heat include: heavy panting, difficulty breathing, vomiting, collapse, increased pulse rate, anxious or staring expression, salivating, weakness, lack of coordination and convulsions. If the animal’s temperature continues to climb the animal will go into a coma and die.

Animals suffering from the heat can be cooled down and helped by doing the following:

Remove the animal from the hot surroundings.
Apply cool water to the animal’s skin by spraying him/her or immersing the animal up to their head in water.
Allow the animal to rest in a cool place with small amounts of cold water to drink.
Seek immediate veterinary attention.

You can significantly reduce the chances of your animal companion suffering from the heat by doing the following:

Don’t leave pets in a parked vehicle during warm or sunny weather for any reason – leave them at home.
Don’t leave pets unsupervised outside on warm days for any reason – leave them indoors as much as possible.
Ensure that pets always have access to plenty of clean, fresh water in a non-spillable water bowl.
Pets should always be kept in safe areas where they have adequate ventilation and good protection from the sun.
Don’t allow your pets to overexert themselves. On hot days try walking them in the early morning and/or in the evening when it is cooler.

What to do if you find a dog left in a hot car?

The reason these warnings come out every year is because so many people are still not aware of the dangers. The B.C. SPCA says it got about 1,000 calls about pets left in hot vehicles last summer alone!

But while for many people the instinct might be to do whatever it takes to get Fido some fresh air, Lorie Chortyk, general manager of community relations at the B.C. SPCA , says it’s a move that’s best avoided. “We really do appreciate how compassionate people are and their efforts to want to help animals in distress, but there are proper ways to deal with it. We don’t want these great people who are trying to help to get in trouble themselves by breaking the law.”

Instead of breaking into the vehicle, Chortyk said Good Samaritans should instead call the SPCA’s animal cruelty hotline.
“Our operators there will ask the person questions to determine whether an animal is in immediate critical distress, if they’re in mild distress or if they’re just inside a car and people are concerned.”
The operator will then contact the nearest official who can help, be it an SPCA constable, or animal control or police officer

Chortyk added that if the pet is just in the vehicle but not in distress, the SPCA recommends taking down the car’s licence plate number and then asking the managers in nearby businesses if they can try to locate the owner.

She said concerned members of the public can also pack a small kit to help keep animals cool while police or other officials are on the way.

A bottle of water, a small cloth that can be made damp and put on the animal or a battery-powered fan can all help, she said.